bored in Calgary ... everything AND the kitchen sink 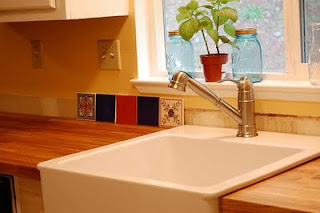 Sort of like 'Sleepless in Seattle' but not... I realize that my mom is aging - it is something I am coming to terms with on any number of levels, but I remembered tonight how much I hate cooking in the kitchen by myself. Mom is much happier ensconced in her recliner with reruns of reruns that are familiar to her. The cat is sleeping happily on the couch as she is elderly too, and even the remote possibility of food falling on the floor is no longer an enticement to hang out in the kitchen.

Now, I am blessed currently in my borrowed house to have a kitchen which extends into the open living room and it is easy to interact with anyone else who is nearby. This house, my childhood home, is more traditional (pause to pour more Carolans into the glass before the ice cubes melt - this is medicinal you see, to counteract the boredom) with the kitchen completely separate from any other human being in the house. I don't recall this being an issue when I was young, because the kitchen was the centre of all the action - food, kitchen table discussions, drama and tears by the sink and that was where my mom was most likely found. My mother was a working mother, unusual for my era, and once she came home, putting on her apron was probably the first thing she did after shedding her coat and shoes. She faithfully prepared meals during the week for us and on the weekend she would be whipping up cookies and dinners for the week ahead. Some of my favourite memories are in this kitchen.
- we used to have square linoleum that was exactly the right size for me to practice "first position" in ballet - my feet fit just right and the tea towel rack was sort of like the barre
- we always ate our meals at the kitchen table - the dining room table was for, well, stuff to be piled up on and occasionally company
- it was expected that my brother and I would trade off assisting with dishes (we couldn't be trusted to do them together - that was like igniting WWIII) so I would help my dad, mostly
- I learned more about the world doing dishes with my dad - we talked about politics, parenting, the state of the world, made up stories about the families would could see in the playground outside the backyard, visible from the window, told jokes and teased each other - it was pretty magic
- the only telephone in the house was between the kitchen and dining room and in order to talk to my girlfriends about 'private' stuff in earshot of everyone, we had to create codes for the secret stuff - talking to my first boyfriend endlessly from that phone was painful - I couldn't understand why we couldn't get an extension phone but that was beyond my family's means at the time
- even after I left home, whenever I came back, we gathered there around that table, being part of whatever was being cooked up - literally and figuratively
I imagined when I thought about this weekend with my mom - an early Christmas for her since she doesn't want to travel out to be with all of us - that we would be working together in the kitchen like we used to. It just isn't the same being there on my own. Perhaps tomorrow during another snowy day in Calgary, we can create something together - shortbread for Christmas, just like the olden days.
Okay, definitely time for more Carolans - and there might be a rerun that I would like to watch with her coming up next!
Posted by caroldiane at 8:03 PM