There are other faces I remember.... 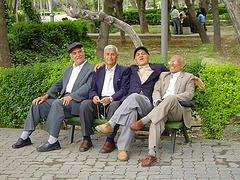 It was brought to my attention that I may have slighted the entire male half of the species in my last blog. It was pretty much focused on the "fairer sex". And I realized that if the blogger-that-I-aspire-to-be-one-day Extranjera should happen to read only yesterday's blog, she would be saying "Woman, lighten up, inject a little humour in this or I will not be your follower anymore and you will be down to only TWO". Can't have that happen...

So, in an effort to be fair, I will share with you the gifts, blessings and magical moments that the men in my life have bestowed upon my daughter. I can think of 3 special men who have had an impact on her life. The first gave her mystery and wonder - absolute acceptance of who she was and honoured her power in the world. The second gave her humour and fun - a knowing that it was okay to play video games, collect strange and wonderful objects that were sacred in their own way and to read comic books and MAD magazines. The third and with no doubt the most important is her father. He gave her fearless adventure, a knowing-ness that she could tackle anything and an embracing of the path to awareness, no matter where it takes you!

And to balance it all, she had her big brother, who not only taught her to fart and belch on demand, to appreciate the masculine side of her being and to love ferociously!

Alright, that still reads as a little smarmy - not the macho blog I had in mind when writing it in my head last night (Extranjera, do you do that? What do the big-time bloggers do to prepare for the journey into blogdom??). Still and all, my darling daughter is the woman she is from the grace of all the people she has had her life!

Next, I will have to share with you how my son got to be the mad improv artist and extraordinary man that he has become...
Posted by caroldiane at 10:20 AM

And thank you for the pats on the back (my own hand was getting a little tired too).

To tell you the truth, not that much thought goes into my blogging. I just sit down, spill, spell check (optional), and see what happens. But that's pretty much how I do everything in life. Who knows where the decisions come from. The only thing that I know for sure is that I sit down a lot, and then stuff happens. (now I' starting to get why so many commentors on my blog call me off the hook...)

And I totally love the fact that I'm one of your tags (that is when I really feel like I have arrived...)

Thank you! My one lesson this last couple of months is to write everyday (well, at least when I am sitting in front of the key board!)